It’s the third millennium on planet Earth. Technology has become impressive and space trips are within everyone’s reach. However, technology has also completely changed the concepts of entertainment and having fun, with robots doing most of the work. Nowadays, car races last only a couple of milliseconds and nobody enjoys them a lot.

That’s why a completely new kind of race has been invented: Be Strong, Be the Last.

A race in which the slowest wins!… Except that cars accelerate on their own, drivers can’t brake and the edges of the track accelerate the car even more! The only way to slow down a little bit is to hit other cars or carefully placed death traps like rocks, robots and of course that herd of robot sheeps crossing the track right now. Only the bravest (or the luckiest) will reach the end of the track after all the others and be the rightful champion! In this peculiar race, challengers from all over the galaxy compete to gain prizes and bring honor to their native planet’s technology.

Who’s going to prevail? Only you can find out. Buy your ticket now!

Be Strong, Be the Last is a 3D single player racing game with the possibility of playing online multiplayer or local multiplayer with split screen.

In this racing game the goal is quite unusual: the player who arrives last, wins the race.

Each player will choose a character with its own specific kart before each game.

The driving system is designed to accelerate the car on its own and there’s no braking system so the player has to find out a way to slow down her race. She can also drift to obtain a better steering.

Driving well is essential to avoid hitting the edges of the track and the opponents’ attacks (that accelerates the kart), while reaching obstacles to slow down the kart.

Another basic mechanic of the game is the collision between karts. Players will need to use them to slow down their kart and accelerate their opponents’ one. Whenever a kart hits another one, the latter gets pushed in the direction of the collision. If performed correctly the car that is hit will be accelerated while the hitting one will be slowed down. If both cars try to push each other the result will be that they will both slow down a little bit.

Karts also have the possibility of using powers to alter the course of the race. These powers have several effects like accelerating the opponents or giving them maluses. A random power will be given to the player whenever she collects one of the power cores scattered on the track.

Graphically the game is in cartoon style with fun characters and colorful settings. 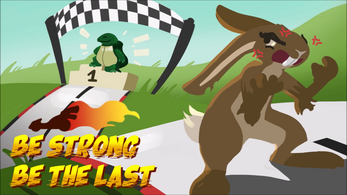 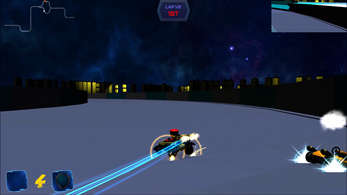 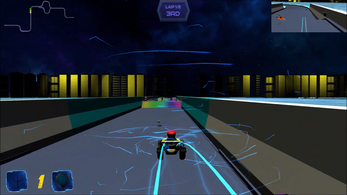 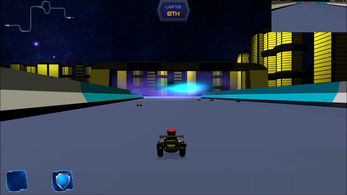 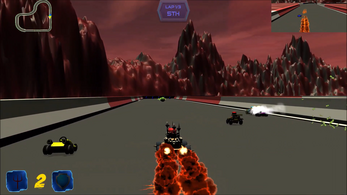 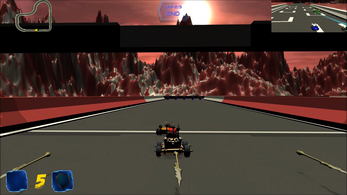 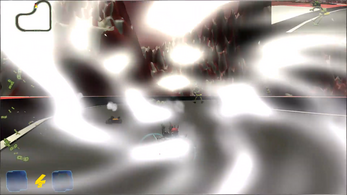